I go to WaR the first Tuesday of every month.

Writers as Readers is the book club I joined through In Print. Members each select a month to “host” (we meet at Barnes & Noble) and a book for the group to read. Four meetings in, not only am I duly impressed with the selections and subsequent discussions of the group, but I’m smarter for it!

What makes this book club different than most is that we are all writers. We’re reading as writers, dissecting as writers and deliberating as writers. We’re still reading for the same reasons as other readers—entertainment, escape, education, but we’re also trying to figure out what makes a good book good and how a bad book could be better.

In his How to Read a Novel program through UW-Madison, Christopher Mohar says, “Writing is entirely about decisions and effects.” I have found that I read differently now. Separate from the storyline, my mind registers things like plot, theme, pacing, character development and adverb use. I notice the author’s decisions and their effects.

In the past we have read and reviewed The Language of Flowers, Beautiful Ruins, and The Art of Racing in the Rain, all literary fiction. This month’s selection was my choice, The Ocean at the End of the Lane by Neil Gaiman. 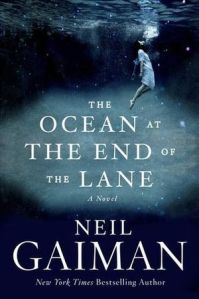 I was a little nervous dumping a less easily categorized novel on the club, but we all agreed that this group gives us the opportunity to read and review titles we might not normally be drawn to.

Ocean at the End of the Lane is about a middle-aged man revisiting his childhood by literally traveling down memory lane…to the “ocean” that resides there. The story opens with the unnamed narrator returning after a funeral and recalling the incredible tale of a few days when he was seven years old. The house he lived in is gone, but the farm at the end of the road where his friend Lettie Hempstock, “she was much older than me, at least eleven,” her mother and grandmother lived, with their duck pond, is still there. The bulk of the story is from the child’s point of view. A series of supernatural events occur, but as told by our young protagonist, they are completely believable.

Gaiman does a terrific job channeling the compliant naiveté of a child and also the things children know to be true. That he travels to a land with spiky plants, furry cattails and an orange sky is perfectly acceptable. That his father dunks him in a cold tub fully clothed is intolerable. “I was horrified, but it was initially the horror of something happening against the established order of things. I was fully dressed. That was wrong. I had my sandals on. That was wrong. The bathtub water was cold, so cold and so wrong.” (p. 72)

The WaR discussion about this book covered themes, characters, style, and favorite passages. I felt the strongest themes were the basics of survival—food, shelter, clothing, family, stability. Another member was intrigued by the handling of good versus evil. Also mentioned, and greatly discussed, was the use of religion. I didn’t see that before our talk, but once it was presented, the references kept surfacing.

That is a perfect example of why WaR is an exceptional group! They’re opening my eyes to what I should be seeing, helping me to identify things that my readers might notice and I need to be aware of.

Another prevalent theme dealt with the comparisons of adults and children. Towards the beginning of his story, the boy recognizes that, “…Adults follow paths. Children explore. Adults are content to walk the same way, hundreds of times, or thousands; perhaps it never occurs to adults to step off the paths, to creep beneath rhododendrons, to find the spaces between fences.” (p. 56)

In the midst of their adventure, Lettie says, “Grown-ups don’t look like grown-ups on the inside either. Outside, they’re big and thoughtless and they always know what they’re doing. Inside, they look just like they always have. Like they did when they were your age. The truth is, there aren’t any grown-ups. Not one, in the whole wide world.” (p. 112)

There are many times that the boy feels he cannot win, cannot even properly fight, because he is up against grown-ups. By the end of the story, the differences in age and experience are no longer important and things unfold as they should. Matter-of-factly.

There has been much discussion about the target age for this book. It is billed as an adult selection but almost entirely focuses on the adventures of a young boy. I felt it was an adult book, that the subtleties of memory and perception would be lost on someone who’s only lived part of their life, but I agreed there would be merit for all age groups (although some scenes are quite upsetting, potentially terrifying). It was even said that a rereading every ten years or so might bring new insight.

Because the book was so short (180 pages), I read it twice. The first read through was just okay, but I really enjoyed it the second time. Of course, I don’t think you should have to read a book twice to get it and that in itself was a learning tool for me as a writer—why did it take two passes? How can an author better engage the first time?

Going into this book, I was the only club member familiar with Gaiman’s body of work. I don’t know if they’ll read him again, but if they’re so inclined– Neverwhere is my favorite. 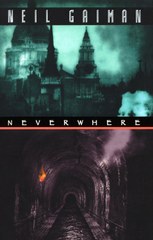 The overall impression of the book club to Ocean was positive. Even those who didn’t care for it or couldn’t relate seemed accepting of the selection for learning purposes as engaging conversation ensued. (Whew!)

Next up, I am Malala, another non-literary, this time non-fiction, choice.

Through WaR, I am discovering decisions and effects.
Now, to apply those lessons…

I am an artist, crafter, designer and writer. I enjoy working with mixed media-- applying visual and tactile manipulations to telling a story. Not a lot of market for that, though, :), so I'm focusing on short story submissions and novel completions. Yes, plural. Lots of beginnings, too many ideas, not enough focus. View all posts by Mary Fran Says