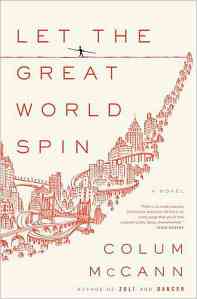 The In Print Writers as Readers group discussed Colum McCann’s prize-winning novel, Let the Great World Spin, at our June meeting.  We agreed about several important things: McCann is a terrific writer with many breathtaking, thought-provoking sentences and images; he speaks convincingly in the different voices of the eleven main characters so that each contributes a special “sound” and meaning to the complex book; the varied characters connect plausibly in the intricate plot.  The message of the book: we are all different; we are all part of each other as the great world spins.

The characters include New York City itself, an Irish priest who keeps his door open to prostitutes; two of the prostitutes; the priest’s brother; five women who lost their sons in the Viet Nam war, one of them from Park Avenue, another from the projects, who become lifelong friends; two healthy, happy children with a nurturing Hispanic mother in love with the priest;  two other children adopted into fortunate circumstances after the deaths of their loving but damaged mother and grandmother; a pair of upper-class hippies on drugs whose inattention causes a fatal accident.

The stories raise the crucial political issues of their day – and ours: racism, poverty, immigration, drugs, social class. There is a vertical theme which emphasizes the widely disparate economic and social conditions of the characters. Most of the main characters live in the upper floors of apartment buildings. Characters we meet in a sentence or two stand in the canyon of Manhattan skyscrapers craning their necks to watch the man walking a tightrope at the top of the Twin Towers.  The tightrope walker is high above them all.

Despite our appreciation for the book, we were dissatisfied with a few things. The pacing, often excellent, sometimes dragged. The phone phreakers, including a graffiti artist, were gratuitous. The fate of the priest’s brother and the upper class hippies wasn’t convincing. While the thousands of details about the city and the characters were impressive and fascinating, they, like an eleven-layered torte, sometimes tasted too rich.  Reading the book was work!

During the last fifteen minutes of our discussion the Writers as Readers did something we’d never done at earlier meetings. We hunted through our copies of the book for our favorite quotes and images and eagerly read them out loud to each other. It was a wonderful ending to a wonderful meeting!