As she stepped through the door freezing air slapped the small, caramel-skinned girl’s face. Blinded by white glare, she staggered backward and gasped. Suddenly inhaled air burned her lungs.

“It’s just snow; go play, have fun.” A hand propelled her into a colorless world and the door slammed behind her.

Her eyes adjusted first but the skin on her face still stung. She looked down at the bulky boots on her feet and kicked at the white powder covering the stoop. Like ash it scattered in the breeze and clung to her clothing. The image brought tears to her eyes. Play? Have fun? In this? She remembered walking in black ash and tried to block those last moments of long ago from her mind. 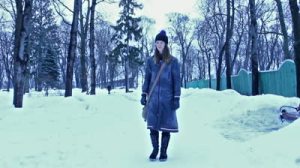 She wiped her eyes with a mitten and stepped into the glittering gloom. Slogging through the six inches of snow that cloaked everything, she made it to the hill overlooking Wilson Woods. The evergreens seemed black as they cowered under icy shrouds. The fall’s leaf color was gone. What lay before her was desolation; bare skeletal limbs reaching forlornly toward the gray sky. Her only haven in this place was dead. She wanted to die too.

***
After a lifetime of technical writing, Larry Vint, has found that creating fiction is much more interesting and fun. He leads a Society of Children’s Book Writers and Illustrators group in DeKalb and was a founding member of the DeKalb Area Writers Group.