In May, the Writers as Readers (WaR) group discussed 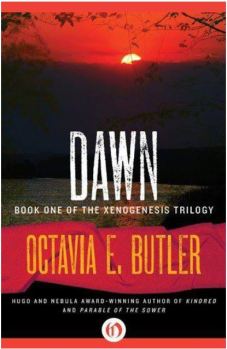 Dawn by Octavia E. Butler, an African American science fiction writer. This was Book One of the Xenogenesis Trilogy, now published under the current title of Lilith’s Brood. This book was written in 1987 and the undercurrents of the U.S. and Russian nuclear arms race have destroyed earth as we know it at the beginning of our story.

This literary genre is not one of my favorites, but Octavia is an elegant writer who kept our interest with her very visual depictions of Lilith on an Oankali ship. Depicting the story centuries into the future permits the reader to believe the setting that is portrayed. She uses archetypes that depict the ugliness of the aliens and she left us wanting to read the rest of the series.
Themes of sexuality, gender, race and family are explored. There are also parallels to the experiences of slaves as Sharon noted in her reflection. Katie was enamored by the book and felt it brought about religious overtones. The abuse of power was an underlying factor that motivated several characters in the book.

Several scenes were pivotal – when Lilith met the aliens for the first time her fear was palpable. The “sexual encounter” between Joseph, Nikanj and Lilith was tantalizing. The conflict the survivors of the nuclear war experienced was manifested in several instances, as more and more survivors are awakened, the people are choosing between Lilith and a dissident faction.  It reaches a frenzy when one of the dissident’s arm is broken. The genetic engineering that the Oankali want to create leaves tension for the humans selected to re-inhabit the earth. As the first series ends, we find out that Lilith is pregnant and she is apprehensive about this child who has been modified by Nikanj.

Dawn made us wonder, think, and see things differently. It reminded us of the narcissistic view we have of the human species and it opened our minds to seeing other species as less evil and terrifying.

Our next meeting is scheduled for June 7th, 2016 at the Barnes & Noble book store at Cherry Vale Mall in Rockford at 6:30. We will be discussing Gilead by Marilynne Robinson.