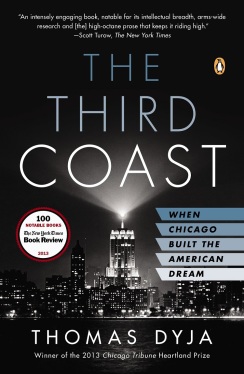 The July selection for Writers as Readers (WaR) was The Third Coast: When Chicago Built the American Dream, by Thomas Dyja, a book about the history of Chicago. I was eager to read this One Book-One Chicago selection for 2016. I enjoyed the blend of story-telling and history woven through Devil in the White City by Erik Larsen and was looking forward to more like that. I loved the idea of Chicago being a “third coast”, the heart of an emerging America influencing the arts, politics, and construction of a nation, from New York to L.A.

Beginning pre-1945 and covering 544 pages through 1960, this book, although chock full of interesting tidbits and name dropping, did little for me in revealing the American dream building history of Chicago. I felt the author focused too much on a handful of people; Mies Van der Rowe and Nelson Algren, specifically. During these incipient years, Chicago was a hub of activity and growth economically, culturally, and socially. It introduced the nation to the likes of McDonald’s, Playboy, improv, and rock’n’roll. The arts were huge with local talent including Mahalia Jackson, Gwendolyn Brooks, Studs Terkel, and yes, Van der Rowe and Algren.

I felt it was written with a contemporary bias–attaching racism, corruption, and urban tension to otherwise great strides in a post-war world. I read this with a dispassion supplied by the author. I was surprised to discover Dyja was a native since I never got the impression that he liked Chicago, I never sensed it as “home”.

At the time of our book club meeting, no one in attendance had finished the book, so our discussion was limited. One member enjoyed the text from an academic perspective and found it very interesting. Another was halfway through and was looking forward to completing it. Others felt it was a challenge to read, lacking focus and flow. Despite its structural timeline, it bounces back and forth making it hard to follow at times. It was mentioned that it seemed like an info-dump that could’ve used a strong editor. The bones were there, and fascinating, they were just too scattered to engage.

Having finished it, I believe The Third Coast is densely written and well-researched. There’s a lot of worthy information here; it just wasn’t presented in a way that was inviting to me.

One thought on “The Third Coast: When Chicago Built the American Dream”